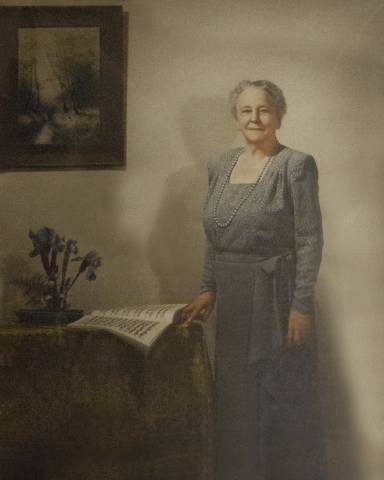 Mrs. W.E. Robertson one day approached Miss Maud Densmore asking whether the latter would “foster a project she had in mind.” She was told that would depend “if it were something really worth while and having a future.” Mrs. Robertson’s suggestion was that this was the time to organize a women’s chorus in Eugene where she felt there was much talent and to let Mr. Evans use the group to illustrate his lectures. Miss Densmore concurring that this was indeed something worth while and having a future went with Mrs. Robertson before the Mu Phi Epsilon patronesses. They agreed to sponsor the attempt and named Mrs. Lillian Seaton of their number as chairman of the project.

A notice in the paper asking women interested to respond brought in more than 300 applications, of whom 110 were finally accepted. Mr. Evans held tryouts before hidden judges while Miss Densmore and Mrs. Seaton received the applicants. The group under this temporary organization met for practices in the auditorium of the Washburne Store and in the mornings later at the Chamber of Commerce. Some of the women in the group came 18 and 20 miles. Mrs. Seaton though not a singer, attended each meeting. Miss Densmore was the accompanist and Mr. Evans directed. The group prepared several numbers which they were able to sing without the music when Mr. Evans gave his lecture. They sang at the Osburn on a platform erected at the north side of the dining room. Mrs. Seaton was called out of town during the spring and Miss Densmore, herself an advisor of Mu Phi Epsilon, was named to replace her, before the spring concert.

In the fall of 1935, Mr. Evans was ill and unable to resume rehearsals. Miss Frances DeLoe was chosen as director until such a time as Mr. Evans again could take charge. Miss Lois Nordling was the new accompanist but resigned before the concert and was succeeded by Celeste Campbell. The spring concert was given April 1936, at the Baptist Church, as a benefit for the Girl Scouts.

The following season, 1937-1938 Mr. Evans was still unable to take the group and Miss DeLoe moved away. Mrs. Cora Moore Frey was appointed director with Miss Alice Holmback as accompanist. The annual concert was given May 16 with Miss Clara Pladsen of Seattle as guest soloist.”

Sign up for our newsletter to receive the latest news and event postings.